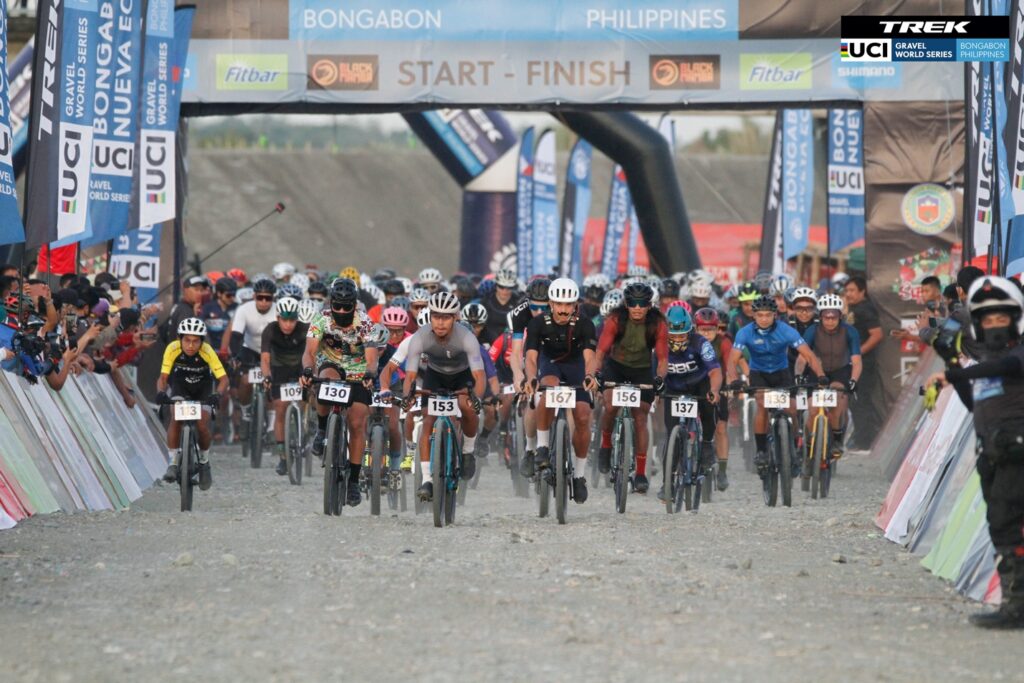 With some of the most inspired riding and trying tracks in a race this year, the 2022 UCI Gravel World Series Philippines is in the books, literally in the history books, as being the starting point of the first-ever race series of its kind under the Union Cycliste Internationale (UCI).

The multi-nation, multiple-leg race series kicked off last April 3, 2022, in Bongabon, Nueva Ecija, a picturesque municipality that has become a favorite destination within the global biking community for the past few years.

After enduring the dirt road with a flat tire near the finish line, Butuan native Riemon Lapaza emerged as the top placer of the Philippine leg in all categories, clocking in 3:06:46.7. The

champion of the men’s 35-39 years old category was trailed behind by Netherlands’s Rick Nobel, who placed first in the men’s 19-34 category.

Close to 400 riders were in attendance, all vying for the chance to finish the 85-km race. Each qualifier was awarded with a finisher medal, and 25% of each rider category earned a UCI qualifying medal and automatically made it to the UCI World Championships.

Participants from the Philippines and the rest of the world powered through all the ascents, river crossings, water features, and everything else that Bongabon’s legendary terrain put in front of them. As Vic Narciso, one of the riders, described the journey as he crosses the finish line, “it was the most challenging and violent race I’ve ever done, but I can’t stop smiling.”

Ann Aleonar, who has been racing since 2010, shared that she was overwhelmed with gratitude. “I took a 5-year break from racing, and anyone who’s raced knows that it isn’t easy to come back – especially up to racing level,” Aleonar said. “And then the pandemic happened, it really wasn’t easy. When I actually finished and qualified, the first feeling I felt was gratefulness.”

The Philippine leg attracted competitors from Europe and Asia, who not only found victory here in the country, but a biking scene that welcomed them with open arms. Tokyo’s Junro Nagashima of cycling team Roppongi Express, said that he was not surprised at how friendly the Filipino riders were, but that he was surprised at how comfortable they all made him and his teammate feel. Rick Nobel from the Netherlands, who placed first in the 19-34 Male category, was also seen smiling from ear-to-ear, in the midst of his newfound friends within the local riding community. Jared Hui, a rider from Singapore, wrote a long testimony on Facebook about how local MTB legend Bans Mendoza lent him his personal bike after he realized that his own two-wheeler wasn’t the right setup for the race.

Bongabon Mayor Allan Gamilla also made an appearance and expressed gratitude to the organizers for tapping Bongabon, Nueva Ecija as the first and only Asian leg in the 2022 UCI Gravel World Series. “This is a big boost for Bongabon as a destination for sports tourism. We hope to make use of the municipality’s potential to help promote the country, and further establish it as major global hub for gravel riding.”

These were just a few of the stories of how an amazing sporting event brings all kinds of people together, with everyone leaving the venue with full hearts already asking about the next race. Clearly, in more ways than one, UGWSPH made its mark.

For the full results of the 2022 UCI Gravel World Series Philippines, visit www.wjctiming.com/main-result