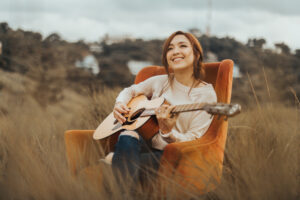 Following the dreamy single “Comment,” which debuted early this January 2020, Barbie Almalbis continues to perfect her signature, swoony alt-pop sound with incisive introspection on her second single.
“Iyong-iyo,” the latest track off her upcoming fourth studio album, tackles a story of strength, perseverance, and faith amidst insurmountable odds. The melodic pop tune is inspired by how the Tabing Ilog hitmaker’s cook found peace from surrendering everything to God during a very difficult time to bouncing back with another chance at life.
Almalbis recounts:
“This song is about Esperanza ‘Bing-Bing’ Maaño, our cook, who’s been in our family for a long time and even married our driver, Dandy. She suddenly fell very ill last year due to a diabetes complication and her medicines were not working. Needless to say, it was such a troubling time for her and everyone who loved her as her future seemed uncertain. She was brought to the hospital and had to undergo amputation surgery, and she shared that it was during this time that her faith in God became more real. While being wheeled into the operating room, she had many fears but suddenly felt peace as she surrendered everything to God. Thankfully, she had a successful surgery and recovered well, and after months of rehabilitation, she learned to walk again with a prosthetic leg.”
Barbie Almalbis co-wrote “Iyong-iyo” with her partner Martin Honasan, who also shares songwriting credits on previous singles “Comment” and Tigre.” Bing-Bing’s determination and humility inspired the husband-and-wife tandem to write and produce the song.
Recording of the track was done by sound engineer Magic Montano at Yellow Room Studios, formerly known as Tracks Studios in San Antonio Village, where most of the Barbie’s Cradle albums are made. “We had Nikko Rivera on keyboard, Jonard Bolor on drums, and Rommel dela Cruz on bass,” shares Almalbis about the musicians who contributed significantly in the recording process. “The main rhythm section was recorded live, and we did overdubs for vocals and guitars. I also recorded backing vocals at my home studio.”
Barbie Almalbis’s “Iyong-iyo” is now out on various streaming and digital platforms worldwide via 12 Stone Records. It’s the second single off her as-yet-untitled album to be released this year.