Pasig River Rehabilitation Commission (PRRC) relocated another batch of informal settler families (ISFs) along the stretch of Estero de Magdalena in Manila on Tuesday, July 10, 2018 with the help of the Local Inter-Agency Committee of Manila and the Local Government of Trece Martires, Cavite.

Goitia said that before the relocation, the families were accompanied and assisted by PRRC in various community dialogues and ocular inspections as part of their social preparation.
They were also provided with trucks and vans as they move to the relocation site.
The Department of Social Welfare and Development – Manila likewise provided each family with food supplies such as rice, canned goods and coffee.

Other entitlements included livelihood assistance and disaster preparedness training. Goitia further added that Mayor Sagun would spearhead series of job fairs for the families in addition to livelihood training assistance. 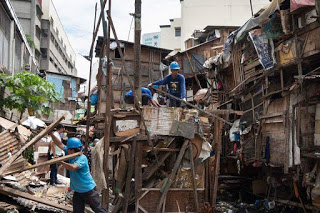 Once all the ISFs are removed, the PRRC could begin the construction of the linear park along the estero as it did in Estero de Pandacan, Estero de Paco, Maytunas Creek, Estero de San Miguel and many other once-polluted waterways.
The government allotted P17 million for the rehabilitation of Estero de Magdalena into a clear waterway with easements developed into a linear park useful for community access and recreation.
The families watched and consented to the dismantling of their informal settlements with smiles on their faces as they moved to Cavite.

Trece Martires Mayor Melandres G. De Sagun welcomed the families in Cavite and ensured that their houses were in good condition, and accessible to important facilities like hospital and school.