One Click Straight Unveils the story behind their New EP “S.S.H.”, under Island Records Philippines 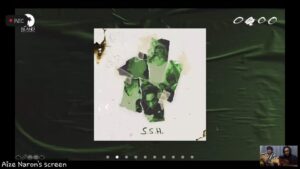 Listen to the EP here: OneClickStraight.lnk.to/SSH_EP
Visit the website: http://oneclickstraight.com/ MANILA, PHILIPPINES | October 2, 2020, Friday  — Island Records Philippines held a media launch of The Story Behind: S.S.H. “Sumaya, Sumigaw, Huminga” by our synth-pop, candy pop band from the south of Manila, One Click Straight. The band shared exclusive behind the scenes outtakes and stories on how the whole S.S.H EP was made. After dropping the single of the same name roughly around two weeks ago, One Click Straight pushes their statement of hope through releasing S.S.H. EP.

S.S.H., which stands for Sumaya, Sumigaw, Huminga, is the band’s newest offering created while in quarantine due to the COVID-19 pandemic. Just like the titular single, the EPwas produced with limited gear and equipment that allowed Toffer Marquez (vocalist, bassist), Sam Marquez(guitarist, songwriter), Tim Marquez (drummer, songwriter), and Joel Cartera (guitarist, percussionist) to be more daring and throw out the “rules” of their usual creative process out of the window.
“One of the things that I want people to remember about the EP is that it’s a statement coming from a hopeless situation, but with a hopeful heart.” Tim Marquez says. “It’s a hopeful outlook for the future as much as our lyrics are about missing someone, [whether] they passed away or something, and [about] frustration and anxiety.” 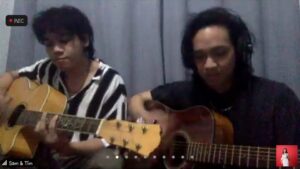 The EP is released under Island Records Philippines, the home label of the band since July this year, that has expressed encouragement and support for One Click Straight with their refreshingly new mindset and their creative direction.
Three Cheers for Freedom Each song from the EP is the four members’ cry for freedom in the new normal where many feel restricted and stifled, similar to the theme of ‘S.S.H,’ the first single.
“Rock and roll, bahala na. We were thinking let’s just write songs the way we want and the way we can. We didn’t have a studio, we didn’t have much gear here at home. [It’s the] complete opposite of what we were doing before.” Sam Marquez talks about the titular single. “Tim thought of the ‘S.S.H.’ song and that was the cherry on top to deliver the whole message of what we’re trying to do.”
The second track, ‘Wag Natin Sayangin,’ talks about making the most out of the time given to spend with one’s loved ones. The song notably features power chords, a nod to the band’s punk rock roots.
“I think a lot of artists suffer from this. We’re all connected all the time 24/7, there’s social media eh. So you’re always fed with people’s ideas and opinions, and that forms the way people write songs these days and the way they produce. Hindi naman sa parang they’re pleasing people, pero subconsciously, there’s this thought na ‘Oh,what would people think of this?'” Marquez also explains. “So when we did ‘Wag Natin Sayangin,’ which [has a] weird arrangement, andun kami sa zone na ‘Well, I’m happy with it; let’s release it.’  And that actually started the wave of new songs.”
On the other hand, ‘Minsan (Palagi)’ speaks of the beauty and struggle of remembering someone special in one’s life. Keeping with the creative experimentation theme seen throughout the EP, this track was produced without the use of the electric guitar.
“We branched off into ‘Minsan’, which was also experimental din. We literally recorded it and made a sample with a microphone of my earphones.” Marquez shares as well.
Hope through Their Eyes, and Ours
Unlike their previous EPs and albums, S.S.H. is also represented by edgier and darker album art, a reflection not just of their grunge rock roots, but also of their motivation and emotions behind the music they are dropping.
“For this upcoming EP and the single, we just wanted to let loose and wanted to go all out, not really caring or not letting other opinions change what we feel.” Cartera paints a picture. ”This resulted in more of a bahala na, messier look.”
With the message of staying true and finding hope in mind, One Click Straight goes beyond their music and into the realm of visual arts through a very special music video for ‘S.S.H.’ Directed by Simon Te, the MV comes in the form of a performance video of the band expressing everything that they have been feeling during their creation of their newest release.
Along with the new music and the accompanying music video, the band is also launching Alone, but Not Lonely, a website that displays art that One Click Straight has found inspirational while making their EP. The website will also host the documented process of how the band conceptualized and created the EP.
With the artistic mix of raw, honest music and digital visual art, S.S.H. is not just a treat to Nostalgics and all the other listeners the band has. The new EP is also One Click Straight’s reminder to everyone who needs to stay at home that despite the trying times, we can find hope, support, comfort and most especially joy in each other.

WATCH THE OFFICIAL MUSIC VIDEO HERE:
OneClickStraight.lnk.to/SSH_MV
MEDIA PICK UP:
Bandwagon Asia
NME Asia
U Do U
Pop Inquirer Whatshappening.com Inssaidor
About the One Click Straight
One Click Straight is a synth-pop, candy pop band from the south of Manila, Philippines. OCS consists of Toffer Marquez (vocalist, bassist), Sam Marquez (guitarist, songwriter), Tim Marquez (drummer, songwriter), and Joel Cartera (guitarist, percussionist).
While heavily influenced by their alternative rock and metal rock roots, One Click Straight has always been a reflection of the four members’ authenticity and passion, shown through their experimental yet honest music and lyrics.
The band was officially founded in 2014, its four members have been making music long before then. With three among them being brothers and all of them close childhood friends, they explored their love of music together while growing up, from learning classical piano from the same teacher to discovering other instruments like drums and guitars.

In 2015, they joined and won The Yellow Room Battle of the Bands (Year One). Under the same label, OCS released Nostalgic, their first EP that features a single of the same title. In later years, the title would be adapted and used to refer to the band’s official street team.

One Click Straight launched their debut album The Midnight Emotion in October 2018. In 2019, the band represented the Philippines in the Music Matters festival in Singapore. After releasing their first full-length album, the band started writing songs in Filipino. In January 2020, One Click Straight released their first all-Tagalog EP: Harana Coma. The EP featured two well-received singles. ‘Manila,’ the first single in the vernacular the band has ever dropped, aired on the MYX Pinoy Countdown for 6 weeks straight and was #2 in Jam 88.3’s Top 10. On the other hand, ‘Paraiso’ made its way into the #5 spot at the Apple Music Top 200 alternative chart in.
One Click Straight also claims to be Asia’s finest softboi candy pop band. Follow for more updates on One Click Straight Facebook | Instagram | Twitter | YouTube | Spotify
Stay tuned for more updates on Island Records Philippines socials
Facebook | Instagram | YouTube | TikTok