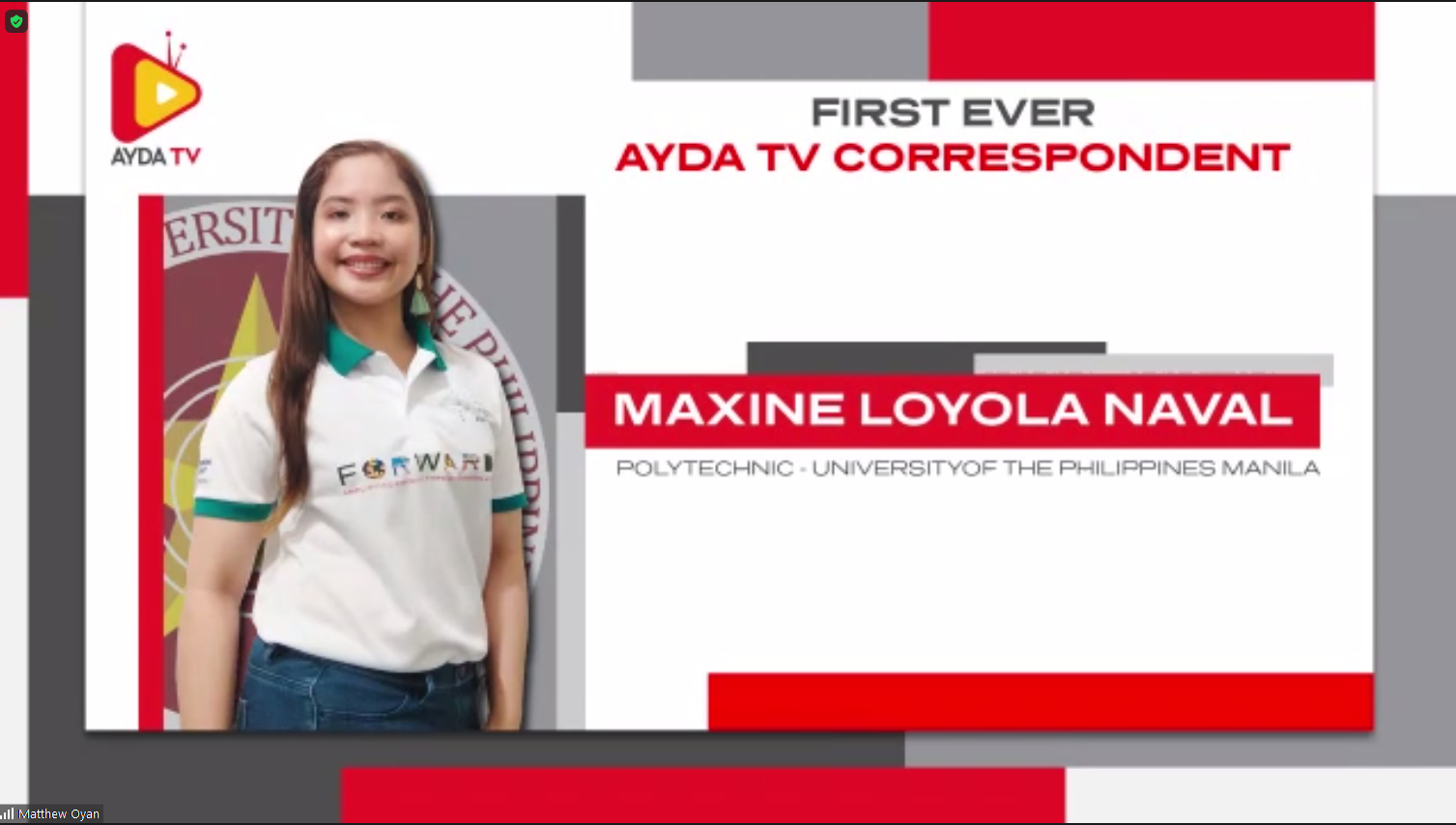 The Asia Young Designer Awards 2021(AYDA2021) Philippines culminated last night with the announcement of the winners in both the Architecture and Interior Design category in a live Zoom event that was also broadcasted live on the NipponpaintAYDAPH Facebook page.

Hundreds of entries came in from different schools all over the country and with the help of the judges this list was whittled down to the top 10 in each category.

Maxine Loyola Naval is AYDA FIRST EVER AYDA TV CORRESPONDENT from the Polytechnic University of the Philippines Manila.

The panel of judges for AYDA is made up of luminaries and respected Architects and Interior Designers here and abroad, most of whom have served as a judge for AYDA and other design competitions in the past.

The panel of Architecture judges is headed by Ar. Richard Garcia of VisionArch has been a part of the AYDA family for some time.  Joining him are seasoned AYDA judges Ar. Boon Che Wee from Malaysia, Ar. Nina Bailon Arce, Ar. Ana Mangalino-Ling, Ar. Ed Casares, and Ar. Leo Pariñas.  Joining the panel for the first time is Ar. Cathy Saldaña and Ar. Normandy Canlas.

For Interior Design the panel of judges is headed by the dynamic duo of IDR. Ivy Almario and IDR. Cathy Almario of Atelier Almario.  They are joined this year by seasoned judges and longtime members of the AYDA family: IDr. Fendarie Su from Malaysia, IDr. Cara Marcelo, and IDr. Chat Fores.  Joining them for the first time is IDr. Wilmer Lopez.

The quality of the entries presented this year have risen to an unprecedented level.  This is largely due to the many mentoring sessions and webinars (DesignTalks) that were offered to the students and mentors throughout the journey.  These sessions are thanks to the unwavering support of Nippon Paint and the tireless efforts of AYDA Regional coaches IDr. Michael Pizarro and Mr. Eric Cruz. 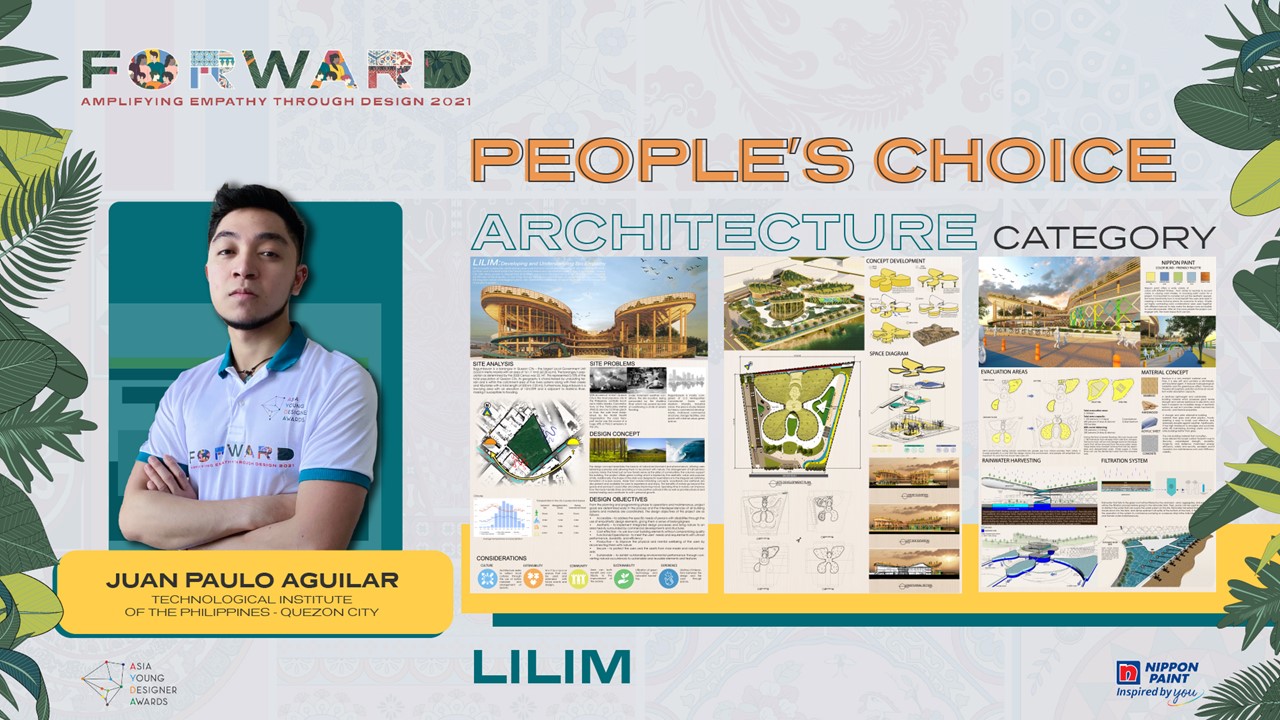 After carefully assessing each of the entries for AYDA2021, the panel of judges was able to identify 10 designs in each category as the best of the best from which they had to decide who receives the given awards. Special awards were given out first and were awarded by Ms. Blanch Garcia and Ms. Giselle Campos of Nippon Paint.

This year’s winners are The University of Santo Tomas (Interior Design) and Bulacan State University (Architecture). 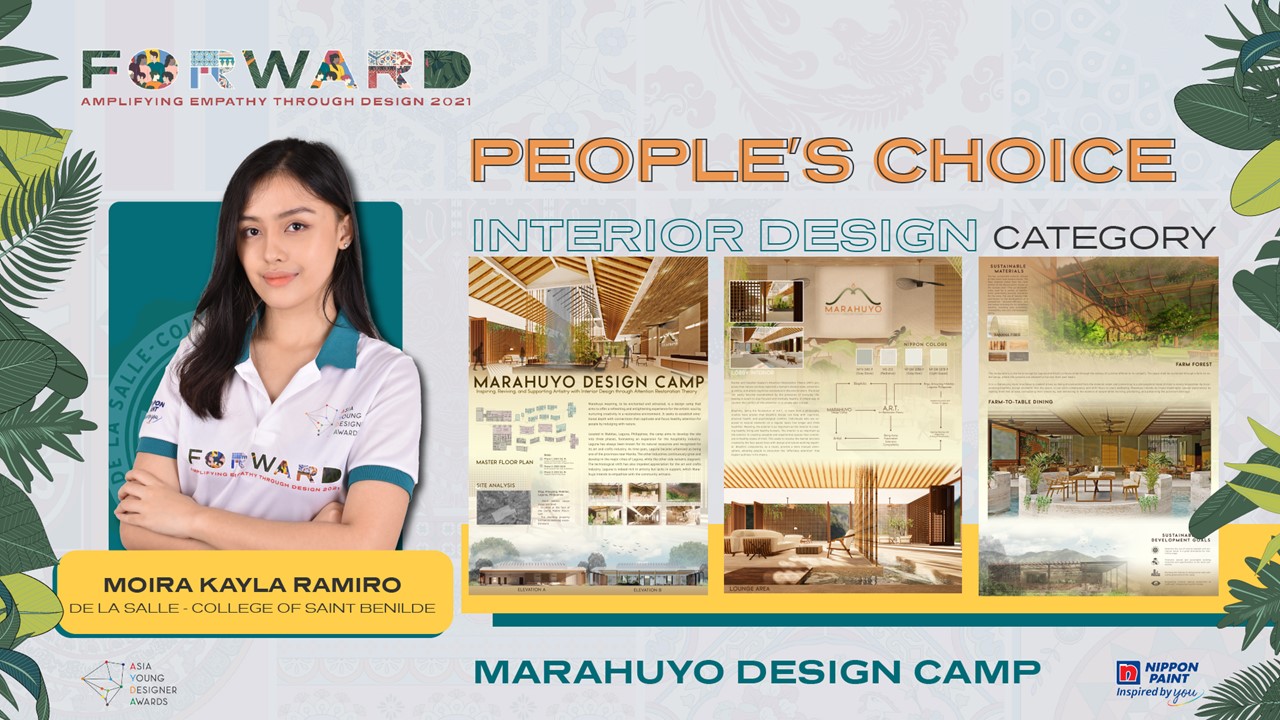 This award is given to the finalist who received the greatest number of votes via likes and reactions on Facebook and Instagram combined.  The winners of the People’s Choice Award are Moira Kayla Ramiro of De La Salle-College of Saint Benilde (Interior Design) and Juan Paolo Aguilar of The Technological Institute of The Philippines Quezon City (Architecture).

This award is given to the finalist whom the judges felt exhibited the best use of colors in their design.  This award goes to Mary Margareth Calvo of De La Salle-College of Saint Benilde for ADALLAY PAVILLION (Interior Design) and Fitzgerald Eyas of Ateneo de Davao University for LAUT (Architecture). 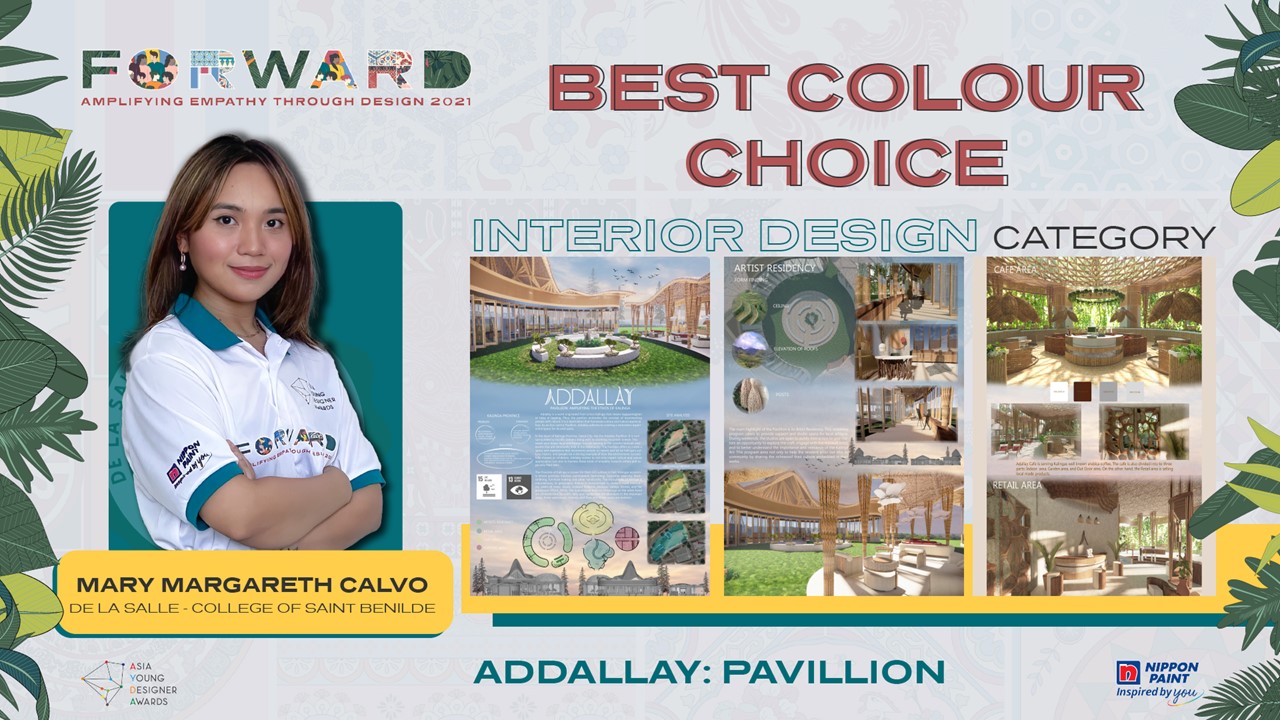 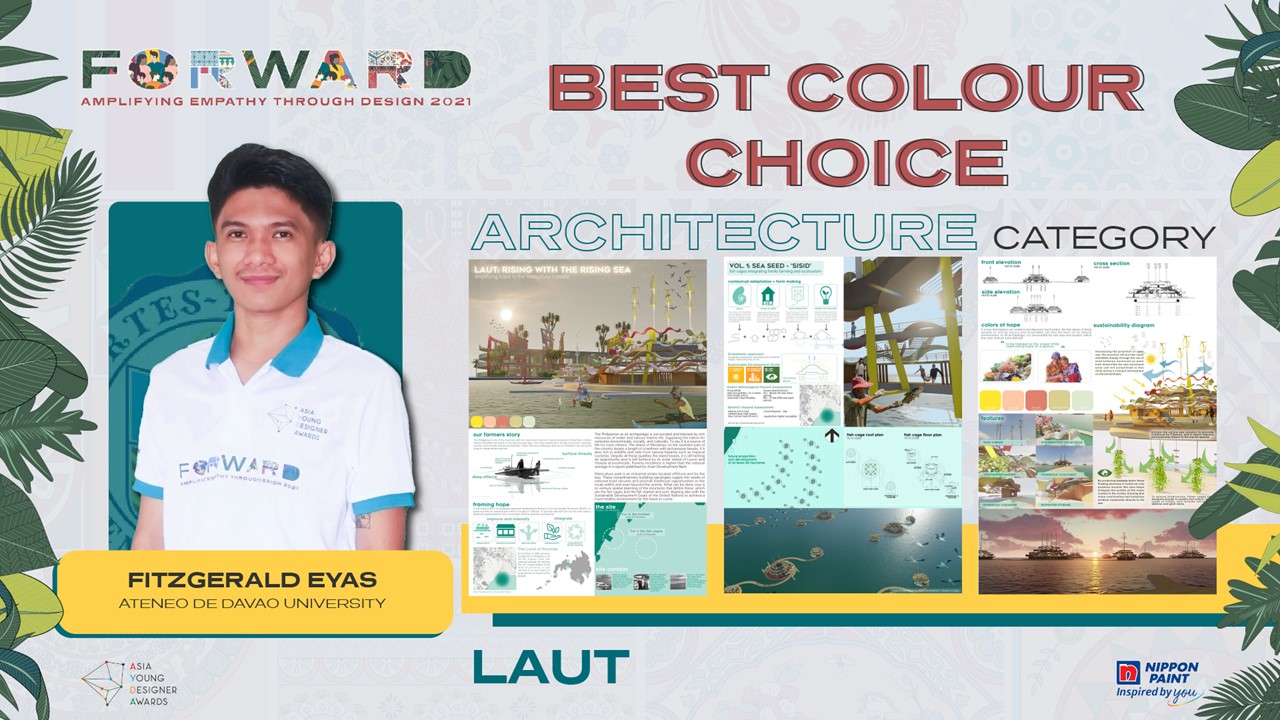 This award is given to the finalist whose design best applied the sustainable development goals of the United Nations.  This award goes to Kizzie Marie Pacaro of the University of San Carlos Cebu (Interior Design) and John Gabriel Espiritu of De La Salle-College of Saint Benilde for Habi-Nidus (Architecture). 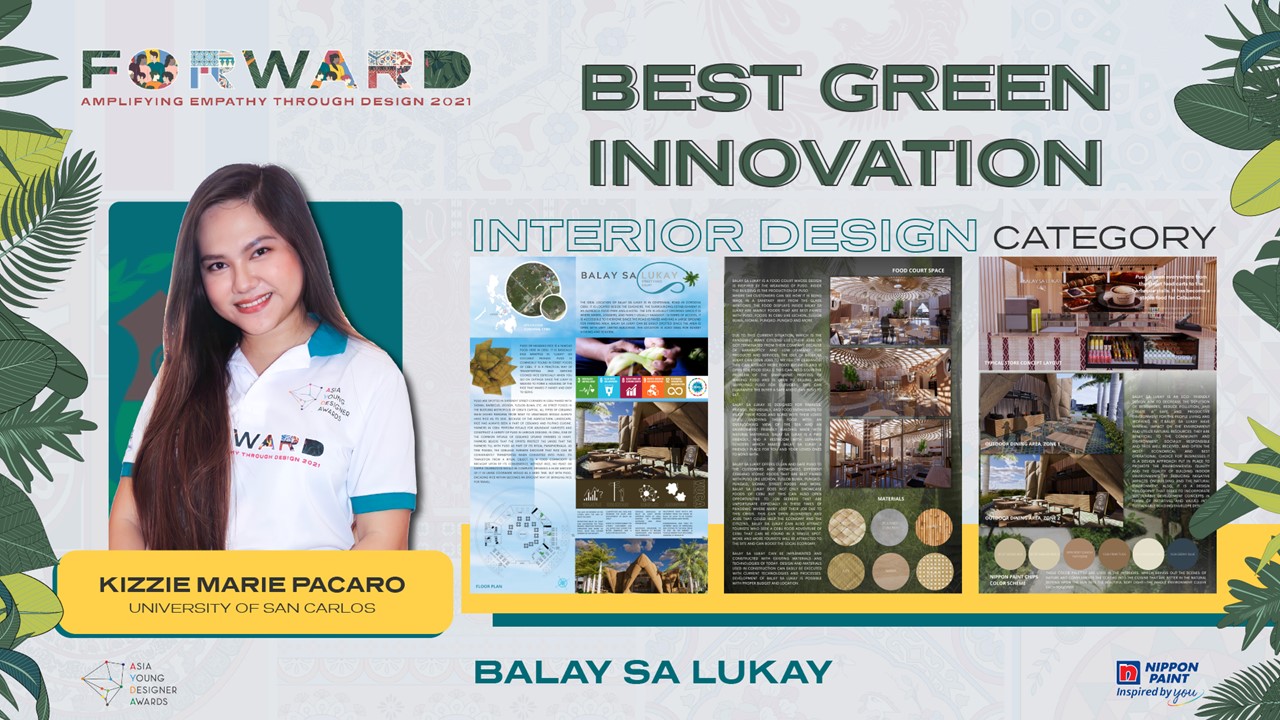 The top two finalists are given the Gold and Silver Awards where the recipient of the Gold Award will go on to represent the Philippines in the upcoming regional summit. 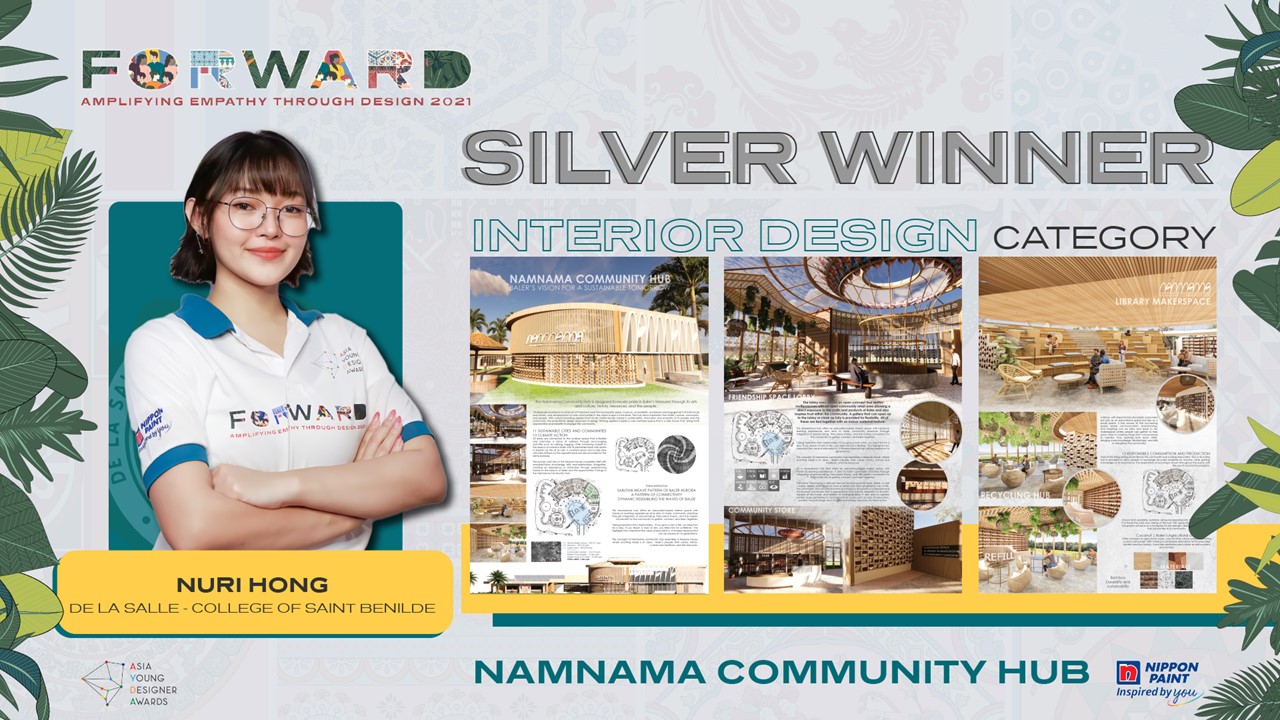 In the second place, this award goes to Nuri Hong of De La Salle-College of Saint Benilde for NAMNAMA COMMUNITY HUB (Interior Design) and Darwin Aquino of Bulacan State University for A.F.L.O.A.T. (Architecture) 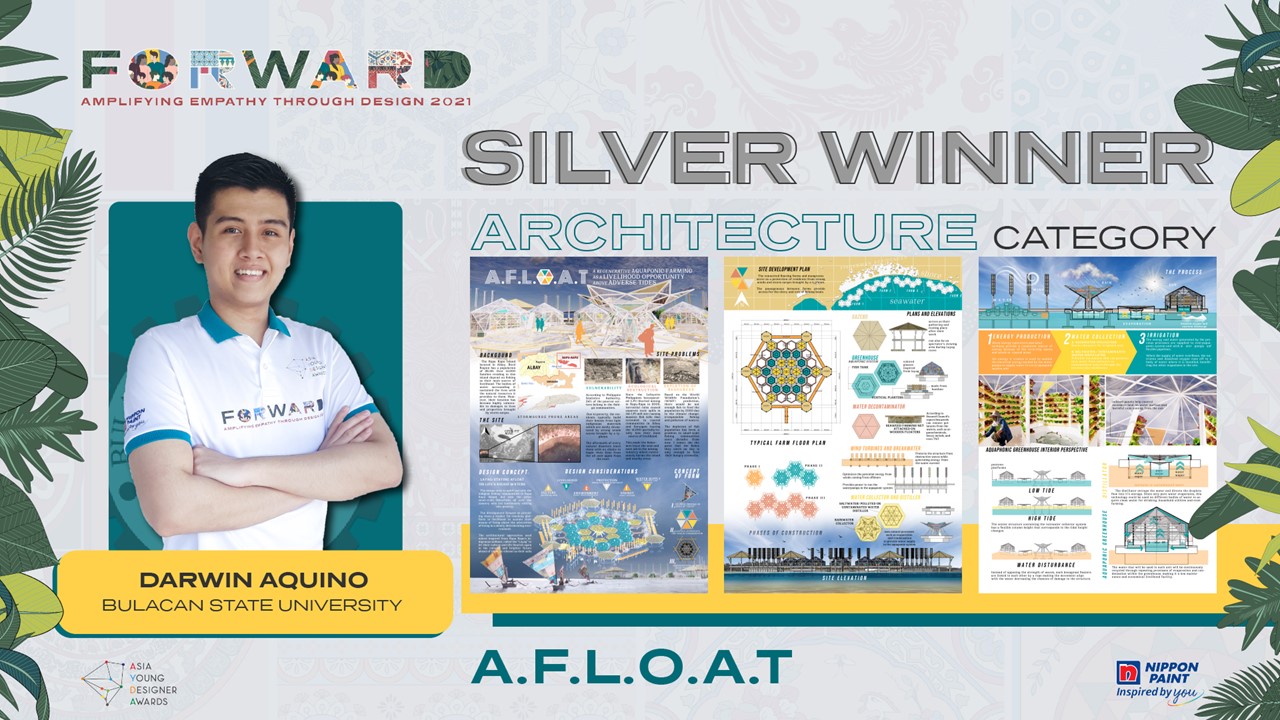 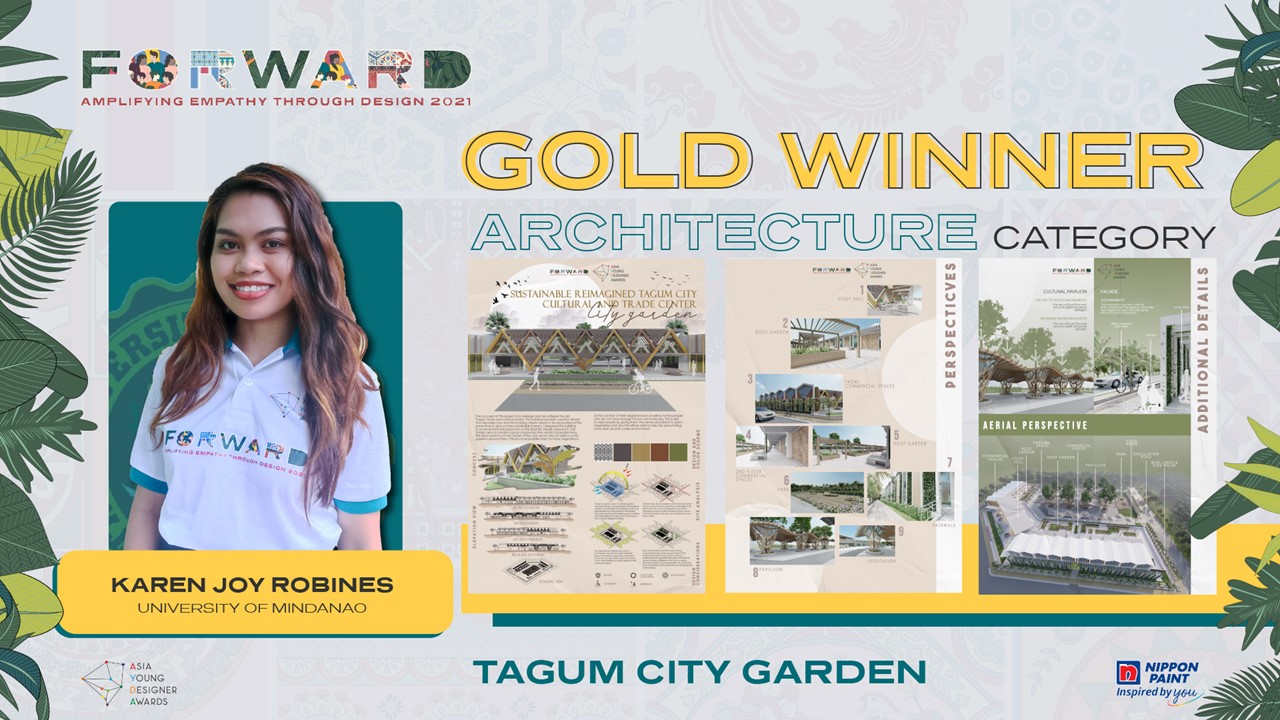 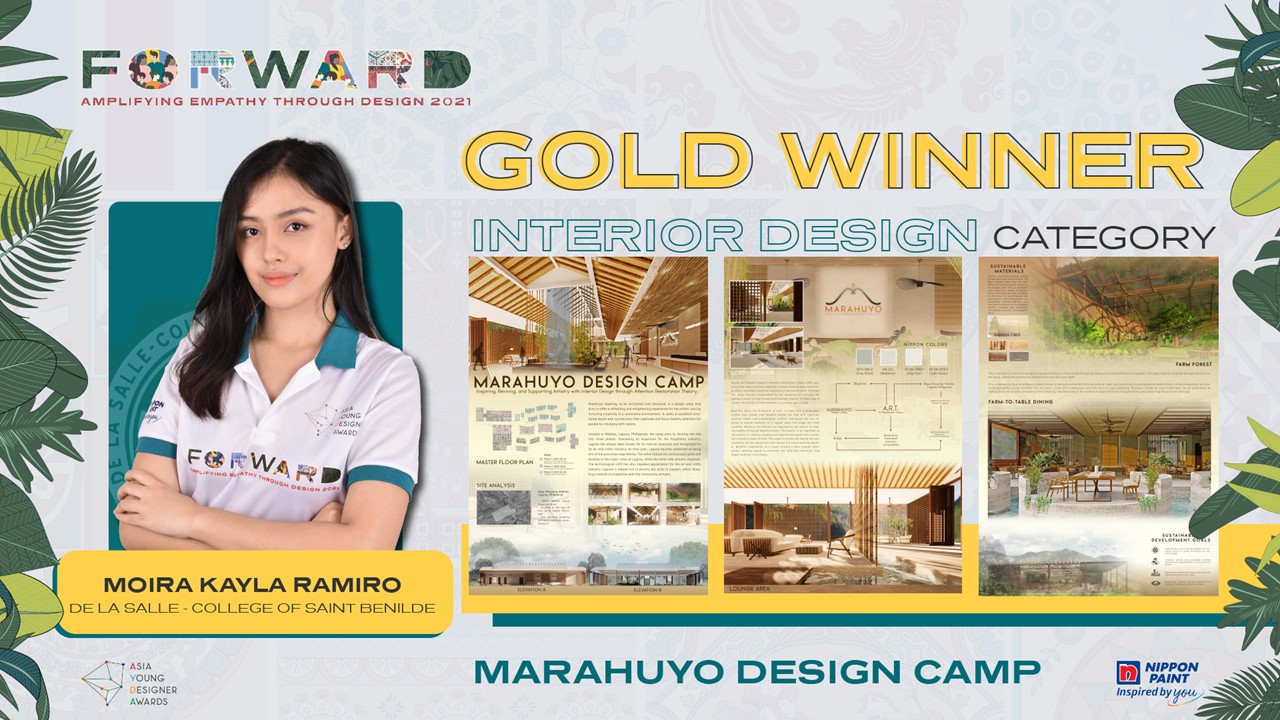 Congratulations to all the winners!  And to our Gold Award winners, good luck as you continue your journey to the regional summit!